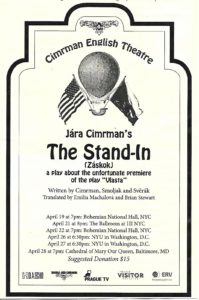 The idea of taking Cimrman beyond the borders of the Czech Republic to the US had been suggested by Brian Caspe very soon after our inception. In 2016, we applied for a grant to the Czech Ministry of Culture but, unfortunately, it was not successful. Nevertheless, undeterred, Brian and his wife Dagmar (who was our previous company manager) thought we could raise the necessary funds through the crowd funding site Indiegogo.  We already had support from the Czech Centre in New York and the cultural department of the Czech Embassy in Washington. All we needed essentially was the money to pay for the flights to the US and some money to buy food. The target was set for $6000.  So a campaign was spearheaded by Brian and Dagmar to raise the necessary funds; and following a very successful publicity campaign and the generosity of a huge number of sponsors the target was surpassed and the tour went ahead. And, we are pleased to report, it was a huge success. It demonstrated to us, that you don’t have to know anything about Cimrman to enjoy the comedy; it is universal. You can find more about our US tour on Facebook or by looking at the information about the documentary below.

On our tour to the US, we were accompanied by David Smoljak, the son of the late Ladislav. David is a well-known commentator , journalist and now a senator in the Czech parliament. So, in co-operation with Czech TV, he made a record of our exploits and challenges. The documentary entitled Cimrman dobývá Ameriku! (Cimrman Conquers America!) was first transmitted on ČT art on 26th May, 2018.

The video is available to watch on ivysilani  by clicking here. 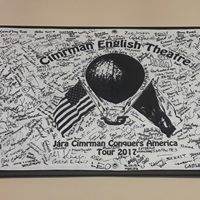