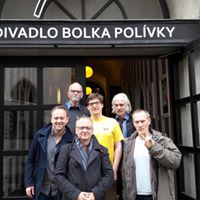 Our mission is to spread the ongoing legacy of Jára Cimrman among English-speaking audiences within the Czech Republic and abroad as the authorised professional company performing the faithful reproductions of the works of Cimrman, Svěrák and Smoljak.

To that aim, we have already performed in Brno, České Budějovice ( where everyone would like to live) and Košice. Ok, we know that these are cities in the Czech Republic and Slovakia, but we have tried to go beyond the Czech Republic…which is exactly what we did in 2017 thanks to an  Indiegogo crowd-funding campaign spearheaded by Brian and Dagmar Caspe. You can find more about the successful sortie of under  US tour.

As for the company,  we were originally six English-speaking actors from different parts of the world: Ben Bradshaw, and Adam Stewart (U.K.),Michael Pitthan, (U.K./Germany), Peter Hosking ( Australia) and Brian Caspe and Curt Mattthew ( U.S.). However, since Brian Caspe left us in 2019 to pursue other vistas, we have expanded our troupe to include another Australian ( Gabriel Andrews), an American ( Marc Cram) and a Canadian/Czech ( Jake Zahradník).

All of us came to Prague for various reasons, BUT what we have in common,  is that we love this beautiful city and country and feel privileged and genuinely honoured that we have the chance to perform the works of Jára Cimrman… in English.

But we can’t do all of these wonderful  things ourselves.  That’s why we need help, and so we are lucky in that we get a lot of support from the producers, Agentura Echo, as well as the very helpful, kind staff at the Žižkovské divadlo Járy Cimrmana . And last, but not least, our lovely Company Manager, Vendy Bazalová.